The Last Psychiatrist wants to fix you.

Allen Carr was an accountant who quit smoking in 1983 after thirty years of maintaining the habit. Two years later, he turned what he learned from the experience into the book The Easy Way to Stop Smoking. The first thing he says: don’t quit smoking until you finish the book. The book became an international bestseller, spawning a system called “EASYWAY,” and in-person clinics to go with it.

If I can find an isolated spot in the woods, turn off the engine and shut the windows, it’s so quiet I can hear my own synapses. Moving to the passenger seat, I go into my private space where I have my books, eat the food that alone is mine, and for a little while I feel no boredom and forget my troubles. I read, I write, I drink a lot of coffee, and every day I do a little math. And because they say no one understands anything unless they retain it, I do the odds and the evens.

It’s Allen Carr by way of St. John’s College, Annapolis, MD. Though Sadly, Porn’s audience may prove to be narrower than Carr’s, the range of its erudition and the scope of its ambitions are both much wider.

I do not remember how I came across The Last Psychiatrist’s blog, but I remember him as part of the golden age of the form when bloggers would go long. Part of the drama was starting a post not knowing or caring how long you were going to be reading it, because if it was any good you’d hardly notice. That name – “The Last Psychiatrist” – was incredible branding. It evoked the drama of the thousand rival schools of therapy, planting his flag as a psychiatrist of the Old School; Freud, dream interpretation, id-ego-superego, defense mechanisms, hour a week sessions till we’re done and this is my rate. The blog itself was a little weirder than the branding, but that feeling of mystery, the whiff of the 19th century, endured. And then he was gone.

It’s in the footnotes where Teach is going to, among other things, explain Freud’s “Oedipus complex” once and for all, which can’t be done without recreating the ancient Greek Universe from whence it came. He starts with Sophocles and zooms out until he has retold the entire story of Athenian democratic failure, to prove that Freud got Oedipus wrong but was looking in the right place. Because Oedipus wasn’t looking to have sex with his mother, he was looking for power through knowledge, knowledge that would absolve him of the need to do anything. Not unfamiliar.

But how, specifically? Here Teach is vague; he writes about things he does, he writes about how people don’t want to act and how people seek knowledge to avoid acting, but he doesn’t say what they should do. Which makes sense. If the problem with porn/content is that it tells us what to do (consume more), why would the physician do the same?

As of this moment, the 2016 dark comedy The Love Witch exists on the B-tier streaming platforms; Crackle, IMDBtv, PlutoTV, the free platforms with the unskippable ads. They make a good home for a film about seduction; like seduction, TV in its primordial form – Segment, Ad, Segment, Ad – works the same way hypnosis works; bombard the brain with information until the mind’s critical faculty breaks and the unconscious mind is accessed. At which point, it’s time to sell the soap.

The Love Witch is a movie about Elaine, a witch looking for her Prince Charming. In the beginning, after her marriage ends and her husband dies not-so-mysteriously, Elaine moves to a coastal California town, meets her home’s caretaker Trish, and explains to her that what was preventing her from finding her Prince Charming – what’s preventing all women from finding him – is that she (they) wouldn’t give men what they want. “You sound like you’ve been brainwashed by the patriarchy,” is how Trish reacts in The Love Witch. “Sounds like the main thing is to deprive him of enjoyment,” is how Teach responds in Sadly, Porn, in a different context.

But what do men enjoy? And did the patriarchy, or something else, brainwash them into enjoying it?

To find out, I watched the A&E documentary Secrets of Playboy, where the women who worked for Hugh Hefner describe exactly what they were put through, and where and how Hef’s experiment in living failed. Hugh Hefner’s cultural project was Alfred Kinsey’s, and Richard Von Kraft-Ebbing’s before him. Their hopes were that they would make everyone happier by allowing more transparency and honesty about their desires, no matter how transgressive. Transparency would make us more sex-positive, less rigid, less bigoted. That was the message. What sold the message was an aesthetic that is clearly the primary influence on The Love Witch; voluptuous, naked, giddy about being alive and desiring.

And just like so many men in and around the Playboy Mansion, Elaine goes from seduction to drugging and torture, in classic exploitation film style, all the while wondering why she’s still dissatisfied and nobody loves or trusts or stands up to her. She wants a Real Man but serves fantasy, and poison.

Elaine seduces, the seduced end up broken and dead, and the seducer ends up dissatisfied and confused. She wants to know her man, her men want to know her, but the more they know the less they act, instead drifting farther and farther from reality into the world of the movies, the movies without and within that tell you what you want, and then give it to you, then tell you what they gave you.

That said, can the book act as the Easy Way to Quit Content? I don’t know. I haven’t quit reading media that I know is bad for me yet. I bought and started Thucydides, but in audiobook format. I’m writing this very article, and by doing so I’m acting instead of consuming.

Editor’s Note: This review first appeared in the print edition of RETURN. 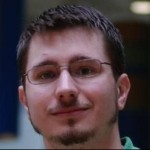